It was a proud moment for the Muslim community of Bosmont on that 8th day of April 1966. The event was no small accomplishment if one considers that the Bosmont Mosque Islamic Centre was formed only two years earlier, during a period of great uncertainty as a result of the disruption of established communities.
It was during the sixties that people of colour were forced to move from areas such as Albertville, Vrededorp(Fietas) and other areas in and around the inner-city to be settled in the new designated areas Bosmont and Eldorado Park.
The Muslim community who settled in Bosmont pooled their resources and with additional aid from the late Achmed Mia purchased the site on which today stands the Masjid and Madrassah buildings. 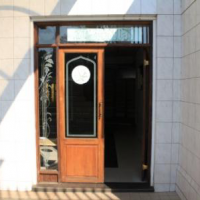 The madrassah is situated securely in the Masjid complex and provides islamic education to learners of varying ages.

The Hall is a multi-purpose facility available for use by the public catering for functions such as Weddings, Fundraisers, Dinners, the Moulood and a variety of social services and youth programs.

Islam is a complete way of life and the Masjid is the centre of community life. We provide a variety of community services aimed at spreading the Deen of Islam and uplifting the community at large.